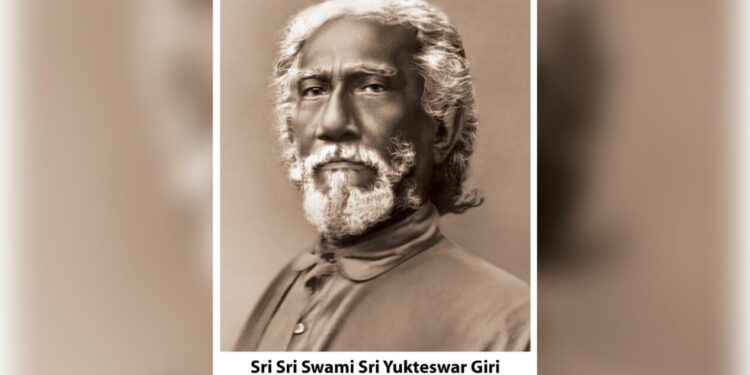 Swami Sri Yukteswar Giri was an outstanding spiritual master of India and the guru of Sri Sri Paramahansa Yogananda, author of the acclaimed spiritual classic, Autobiography of a Yogi. Swami Sri Yukteswarji was born Priya Nath Karar, on 10th May 1855, and hailed from Bengal, rising to attain an unquestionably towering spiritual stature.

His book, The Holy Science, written at the behest of his own paramguru, Mahavatar Babaji, is a timeless classic which outlines deep spiritual truths succinctly and plainly, for all men to comprehend.

The training accorded by Swami Sri Yukteswarji to his foremost disciple, Yoganandaji, was stringent and exacting, yet perfect in all respects. Swami Sri Yukteswarji thus enabled the latter to scale unfathomable heights in bringing the knowledge of Kriya Yoga to the masses of India and the world. “Kriya Yoga is an instrument through which human evolution can be quickened,” Sri Yukteswarji said. It is an exact science which enables human beings to achieve purity of body, mind and soul, and ultimately enables the earnest practitioner to find oneness with God.

Kriya Yoga was propounded by Yoganandaji in the West at the urging of Swami Sri Yukteswarji, who advised him to establish Self-Realization Fellowship and Yogoda Satsanga Society of India to disseminate faithfully the knowledge of Kriya Yoga. Swami Sri Yukteswarji’s guidance was primarily responsible for Yoganandaji’s nascent steps in teaching mankind about yoga and eventually his magnificent success as a spiritual giant whose aura transcended continents.

The first meeting of Swami Sri Yukteswarji with his beloved disciple, Yoganandaji, was dramatic and inspiring in itself. Finding himself magnetically drawn to a tall, imposing figure in a by-lane of Banaras, Yoganandaji, who was then just a teenager, recognised in the saint, his own Guru from lifetimes before. And the first words of the great teacher, “O my own, you have come!” as quoted in the Autobiography of a Yogi, portrayed to all readers the timeless pull of the guru-disciple relationship.

His early years under the watchful supervision of the great Guru Yoganandaji honed his persona in a manner that led to greatness in this world and beyond. It is in the shaping of Yoganandaji to ultimate spiritual heights that the greatness of Swami Sri Yukteswarji’s legacy truly lies.

The power of simplicity is often underestimated by mankind – by those who seek and strive to excel in various fields of endeavour – but the saints of India knew and exemplified the virtues of excellence in simple ways. Swami Sri Yukteswarji’s life was an iconic life. His book, The Holy Science, is a pathbreaking, momentous publication, one for the ages to marvel at. Yet, the life and times of Swami Sri Yukteswarji were dominated by ground level, meticulous tutelage of his disciples rather than expansive, broad-based activities.

He wisely trained Yoganandaji to be the torch-bearer of India’s magnificent deep-rooted teachings, and the latter so ably revealed to the West and the world, the simplicity hidden behind the seeming outward intricacies of these peerless truths.

By being the friend, philosopher and guide to one of the greatest spiritual emissaries of India, Swami Sri Yukteswar Giri paved the way for a spiritual renaissance which is still in the process of gradually enveloping the hearts, minds and souls of truth-seeking men and women across the world. Further info: yssofindia.org

The other side of Kashmir Files