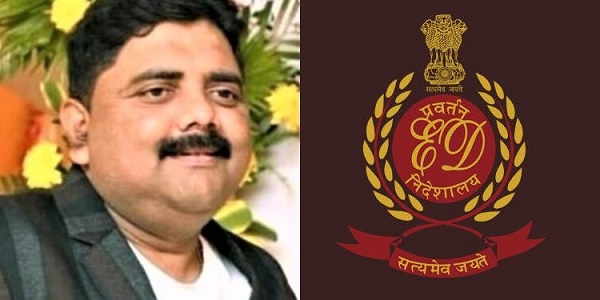 Ranchi, Sept 23: The Enforcement Directorate has stated that power broker Prem Prakash was actively involved in the illegal mining and he laundered and invested proceeds of crime through his companies. Further, the ED has stated that Prem Prakash in collusion with Kolkata-based businessmen Sanjay Choudhary and Amit Agrawal besides Pankaj Mishra and others was engaged in illegal mining activities and money laundering.

According to sources, the ED, in a charge sheet submitted in the Special court a few days back, has stated that the bank account of his company witnessed a huge cash deposit during the financial year 2018-19 to 2020-21.

The investigation, according to sources, has revealed that Prem Prakash received several crores from Kolkata-based Sanjay Choudhary. But such huge payments have no business purposes and any valid reason. Notably, Sanjay Choudhary is one of the directors of the company CTS Industries Limited (U24117WB2003PLC111345) which as per the ED is allegedly involved in the illegal transportation of illegally mined stone chips from Sahibganj. The ED said that Sanjay Choudhary has been arranging funds from other companies too, for Prem Prakash namely Multiplier Enterprises Pvt. Ltd, Alakhnanda Sponge Iron and others. Prem Prakash is in receipt of funds from illegal mining activities from different sources in cash.

When the ED inquired with Eastern Railways it was disclosed that the CST and associates booked nearly 286 rakes from Pirpainti (Bihar) railway siding out of which 251 rakes were booked and transported without the desired transport/mining challans. Such illegality caused a loss of Rs 100 Crore revenue to the government, sources added.

The ED has said that Prem Prakash was hand in glove with Pankaj Mishra and others who are involved in illegal mining. He received huge cash as proceeds of crime that he used for personal gains.

Prem Prakash, the ED said, used his political proximity and clouts for illegal activities and extraneous purposes. He also influenced the administration also.

Prem Prakash laundered proceeds of crime through his company

According to the ED, the cash deposits in the bank accounts of his company M/s Herbal Greens Solutions Pvt. Ltd runs into crores. The money laundering investigation has revealed that Herbal Green Solutions has a bank account (21881132000179) at Punjab National Bank. This is one of his companies. It is stated that from 8th March 2017 to 31st December 2021a total of Rs 5.65 Crore were deposited into this account. Such deposits he claimed were the profit, margin money received from his associate for liquor business against an amount of Rs 5 crores, given to him in his different bank accounts. But he was unable to show any documents and details regarding the share of profit. He was not even in the position to verbally substantiate the claim. The ED told the court that he made submissions that were deceptive in nature in order to ‘conceal the source of proceeds of crime so that these look legitimate. It led the ED to believe that he acquired Proceeds of Crime in cash and laundered them through his bank account to claim them as untainted property.

The money laundering probe has revealed that from the Punjab National Bank account of this company payments of Rs 5.31 Crore were also made to M/s Aurora Studio Pvt. Ltd of Amit Agarwal. These payments were made from 26th August 2020 to 8th January 2021. The ED has claimed that these transactions corroborate the statement of Ravi Kejriwal about their deep relations.

There are several incriminating transactions done through bank accounts through many entities which the ED is investigating. The ED has further stated that in 2017, Prem Prakash’s company had a huge financial transaction with one M/s Laxmi Global Private Ltd. This transaction was something around Rs 5.65 Crore. This company is based at 34 Floor, SB Towers, 37 ‘Shakespeare Sarani, Kolkata. But Prem Prakash termed it a friendly loan which he got through Sanjay Choudhary. But again, he had no agreement paper for the loan. Sanjeev Choudhary and Amrit Choudhary are the directors of this company. Amrit Choudhary is the son of Sanjay Choudhary and Sajeev Choudhary is one of his relatives

The present directors of the company are Purushottam Kumar Tulsyan, Ashok Kumar Tulsyan and Sanjay Choudhary. Shri Sanjay Choudhary of CTS Industries Itd. has been arranging funds from other companies too, for Prem Prakash which includes Multiplier Enterprises Pvt. Ltd., Alakhnanda Sponge Iron and other companies. Investigation has revealed that Prem Prakash is in receipt of funds from illegal mining activities from different sources in cash as well as through banking channels.

During the search and seizure at the residence of Jaishankar Jaipuriar who is the Chartered ” Accountant of Prem Prakash, as many as 16 blank backdated stamp papers were seized. These were purchased in 2021 to show transactions entered between the different companies and fronts of Prem Prakash as genuine and bonafide. When he was questioned, he claimed that he was also in the liquor trade, hence, blank stamp papers were meant for agreements for liquor business between his associates and his front companies.

But he had no answer as to why he did not execute the agreement and kept stamps unused. The ED has said that Prem Prakash used backdated agreements to portray transactions as bonafide.

One Anil Jha who is a staff of Prem Prakash told the ED that he used to deliver and collect cash for anything between Rs 10 lakh to Rs 5 crore for Prem Prakash from one location to another. These were collected and delivered to many persons and finally handed over to Prem Prakash. Prem Prakash used to forward his numbers to the concerned persons who used to hand over the cash to him. Such sensitive communications were made by Prem Prakash over the Facetime application of his Apple Iphone, sources said.