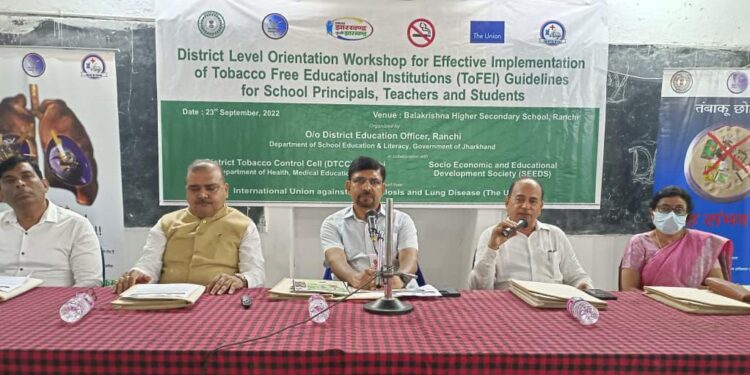 Under the pilot project, 10 schools each (five government and five private) of four districts Ranchi, Dhanbad, Bokaro and Jamshedpur (East Singhbhum) have been identified for making tobacco free model school.

Now selling tobacco product to minor would invite fine of Rs 1 lakh and 7 years of imprisonment. The selling of tobacco products in 100-yard radius of school is already banned under Cigarette and Other Tobacco Products Act (COTPA).

The director, who was addressing workshop organized jointly by schooling education and literacy department and SEEDS as chief guest, said since every year 13 lakh people in country die by tobacco using, it has emerged serious problem and challenge for bright future of our children. He highly praised the efforts of SEEDS for checking tobacco prevalence under guidelines of state government.

SEEDS executive president Dipak Mishra on the occasion shed light on need of the hour for control on tobacco products use. He said that in last 7 to 8 years, Jharkhand government and its technical support partner (SEEDS) have jointly initiated effective step in checking tobacco use and in implementation of COPTA.