China: Lockdown in Zhengzhou after worker protests at iPhone plant 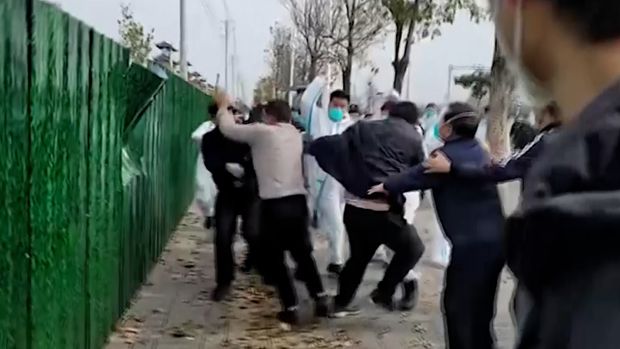 Beijing, Nov 24: China has mandated a COVID lockdown in Zhengzhou in response to the violent protests after hundreds of employees clashed with guards at China’s Foxconn iPhone factory, creating a dangerous buildup of resentment over the nation’s extremely strict Covid regulations and the world’s largest contract manufacturer’s poor handling of the crisis.

Residents have been urged to stay inside “unless necessary”.

Many of the demonstrators claimed on livestream broadcasts that the proposal to withhold bonus payouts was what started the protests, which got started early on Wednesday. The videos could not be authenticated right away.

One video shows workers yelling “Give us our pay!” while being surrounded by individuals wearing full hazmat suits and some brandishing batons. In other videos, employees could be seen removing quarantine fences and firing tear gas. Some employees claimed they were compelled to live in dorms with coworkers who had Covid positive tests.

In a response, Foxconn, formerly known as Hon Hai Precision Industry Co Ltd, claimed that it had fulfilled its payment obligations and denied rumours that infected employees had been living on campus with new recruits.

“Regarding any violence, the company will continue to communicate with employees and the government to prevent similar incidents from happening again,” the company added.

According to Reuters, the factory’s output of iPhones might decline by as much as 30% in November. Foxconn said it planned to resume full production there by the second part of the month. Apple Inc. had issued a warning stating that fewer premium iPhone 14 models are expected to ship than initially anticipated.

The source stated that despite the fact that the most recent unrest has increased “uncertainties” with regard to the aim, the corporation is still working hard to achieve it and that “just a portion” of the new hires were involved in the disturbance.

Seventy percent of iPhone shipments worldwide are produced by Foxconn. Despite having additional, smaller production facilities in India and southern China, it manufactures the majority of its phones at the Zhengzhou factory.

Since the turmoil started in late October, shares of Foxconn have decreased by 2%.