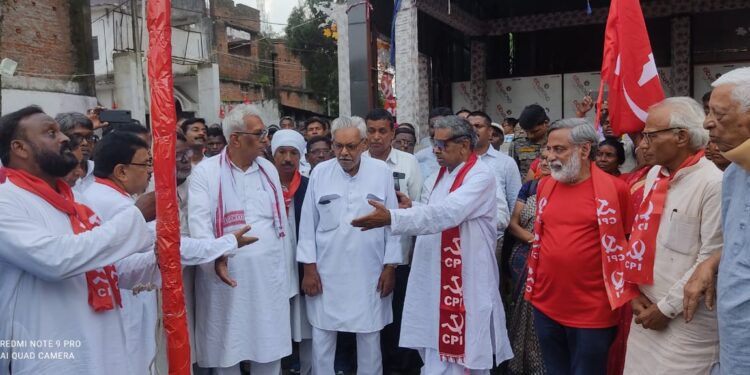 National President of CPI Ramendra Kumar said that the BJP should be removed to save the country. Modi government is running the country with inflation and unemployment. The general public is upset, the economy of the country has been ruined, they have also criticized the state government.

Saying that the Hemant Soren government has the support of the CPI, but corruption is at its peak in the state, no work is done in any of the offices without paying money, he said. The Bharatiya Janata Party adopts every strategy to overthrow the government. Has tried poaching MLAs, but Hemant Soren’s government survived. He said that the state government should curb corruption, while addressing the people in the meeting, he said that the people should intensify the struggle for building a strong communist party in the state.

Secretary Dr Bhalchandra said that the Prime Minister has cheated the farmers and farmers are committing suicide in the country. The Modi government at the Center boasts about development, but the purchasing capacity of the people of the country is exhausted.

Nagendra Nath Ojha said that the farmer laborers are on the margins. There was no electricity in the farmers’ fields, the tehsil factory will be closed tomorrow. Modi government is constantly selling the institutions, all the public institutions of the country were closed under a conspiracy.