by Lagatar News
in Big News, Jharkhand
A A

Ranchi, Sept.15: Amid speculation about taking the future of chief minister Hemant Soren as a legislator following the revelation of the latter’s work of misusing his official position to obtain a mining lease in his name, the chief minister today reached Raj Bhawan demanding a copy of the letter Election Commission of India had sent to the governor giving his opinion regarding the action which can be taken in case of misuse of official position by a legislator.

Soren let the governor know that the main opposition party of the state, the BJP, is creating confusion in the state by taking the letter of the ECI and said how important it is for him to get the copy of the letter in the interest of the state.

During the meeting, the chief minister presented his points in the Angada Mines Lease case of Ranchi and urged the governor to give him an opportunity for a reasonable hearing at the earliest so that the atmosphere of uncertainty, which is dangerous for a healthy democracy, can be removed and Jharkhand moves forward on the path of progress and development. 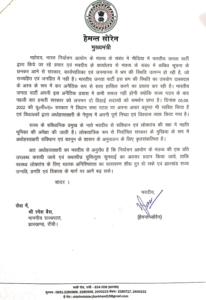 Chief Minister Soren told the Governor that since February 2022, the role is being played by the BJP that he will be disqualified from the assembly on the basis of his taking a stone mining lease. He said that the BJP also lodged a complaint in this regard whereas in many judgments of the Supreme Court it has been said that by taking a mining lease a legislator does not become eligible for disqualification under the provision of section 9 (a) of the Representation of the People Act, 1951.

Chief minister Soren expressed his concern about the delay in disclosure of the content of the ECI’s letter as it had given the BJP an opportunity to give its biased opinion before the opinion of the ECI.

The development took place a day after the Soren cabinet approved a proposal for recognising those as locals whose ancestors had been staying in Jharkhand since before 1932 and thus triggered a debate in the state on its legality.