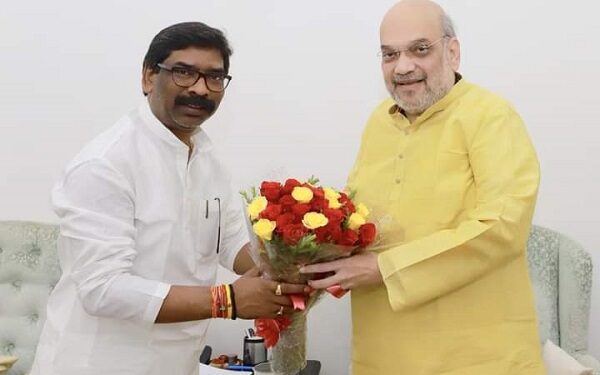 But Hemant Soren kept the card close to his chest when the media asked about issues he discussed with Amit Shah and Mallikarjun Kharge. He first visited Amit Shah at his residence and the talk continued for 45 minutes. Later on, he met Mallikarjun Kharge and held a closed-door meeting for  1.15 hours.

Back in Ranchi, leaders of his party — the JMM— said that his meeting with Amit Shah was centered around the presidential election.  “We have a very positive view towards former Jharkhand Governor Droupadi Murmu who is the NDA’s candidate for the presidential election. But then the JMM has some concerns about Jharkhand and its people that’s why the chief minister met Amit Shah. There are some grievances also. As far as the Congress is concerned, it is our alliance partner hence there is nothing uncommon in meeting Mallikarjun Kharge,” said a senior JMM leader who is close to Hemant Soren.

Asked as to when the JMM would take a final call on the support — Droupadi Murmu or Yashwant Sinha — the leader said that things will be clear in the next three days. The JMM is not in a position to bargain with the BJP as Droupadi Murmu has more than sufficient numbers to defeat her rival. The timing of the meeting has aroused curiosity.

The Election Commission of India is scheduled to conduct the hearing of the case of the office of profit against Hemant Soren and his MLA brother Basant Soren. The hearings are scheduled for June 28 and June 29 respectively. Both of them have already availed enough time from the ECI and any further extension of the hearings is unlikely.

Two PILs namely 4290/2021 and 727/2022 are hanging like a Damocles sword upon him. The Jharkhand High Court is set to hear both PIL on June 30. The petitioner has sought a CBI inquiry into the alleged disproportionate assets of Hemant Soren and his family. An adverse judicial order will land Hemant Soren and his government in trouble.

The Congress which is an alliance partner of the JMM in the government has kept its fingers crossed. “We don’t know why the chief minister met Amit Shah. The possibility can’t be ruled out that the JMM would vote for the BJP candidate in the presidential election. If not dangerous, it will be bad for the alliance. We just wish that he doesn’t succumb to undue pressure from the BJP,” said a senior Congress leader from Jharkhand.