The Bench observed that it was because of this attitude of the State government that no industrialist wanted to come and invest in Jharkhand.

by Lagatar News
in Jharkhand, National & International
A A 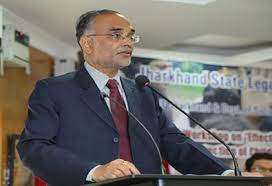 A Division Bench of Chief Justice DN Patel and Justice Neena Bansal Krishna expressed its displeasure over the fact that the State had not filed its response in the petition despite notice being issued in September.

“This is a fraud. You never acquired land yet you gave this private land to the petitioner without acquisition. We have given several weeks to you to file a response. How can you give on lease the property that does not belong to you?”

The High Court said that it would direct registration of a first information report (FIR) against State government officials who had signed the documents, and threatened to impose costs on Jharkhand’s Chief Secretary.

The allegation was that the Jharkhand government gave the 295 hectares of land at the Jitpur coal block to Adani in 2015 for mining, and a bank guarantee of ?92.90 crore was furnished in favour of the State government.

It later came to be known that around 141 hectares of the said coal block was forest land, while 137 hectares was private land. Of the 17 hectares which belonged to the government, a large part of it was forest land as well.

The State government later said that land acquisition for the private land had elapsed, due to which fresh proceedings have to be undertaken and it cannot be used for mining purposes. It was informed that even the forest clearance has not been obtained.

The High Court had therefore passed an interim order in September, restraining the authorities from taking any coercive action against Adani while stopping the State from encashing the bank guarantee.

The Bench observed today that it was because of this attitude of the State government that no industrialist wanted to come and invest in Jharkhand.

Though the Bench was initially inclined to impose costs on the State government, it later said that it will give a final opportunity to file a response.

The case will now be heard on March 29.