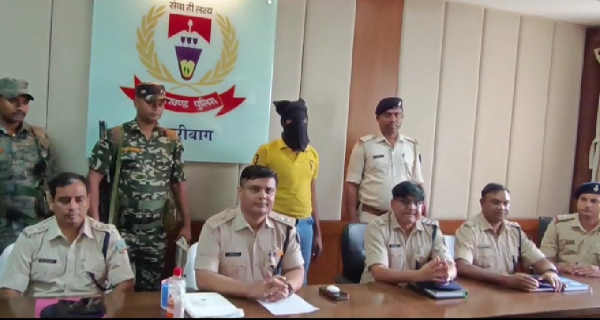 The anti-Terrorist Squad (ATS) of Maharashtra police had arrested him two days ago on the information of the Jharkhand police.

Yadav joined the left wing extremism in 2004-05 after a land dispute. He committed several murders and collected levies on behalf of Maoists besides leading several encounters with police during 17 years of his association as a Maoist.

In Latehar’s Katia Forest in January 2013 during an encounter Yadav with his squad members had killed as many as six security personnel. In the same encounter, as many as four villagers were also killed. During that encounter the Maoists had planted bomb after slitting the stomach of two CRPF jawans.

This is for the first time Yadav has been arrested, Superintendent of Police (SP) of Hazaribagh Manoj Ratan informed sharing information after the Maoist’s arrival in Hazaribagh.

A police official said the ATS team of Maharashtra police had no idea about the ferocity of Yadav when it arrested him. Everything became clear after the Jharkhand police shared information expressing its gratitude to the ATS team.

Yadav’s native village is in Katkamsandi block of Hazaribagh district. He was associated with Maoists as regional committee member. He had gone to Palghar district of Maharastra for his treatment when he was arrested.

SP Ratan said that the squad Yadav was active on the border areas of Chatra and Hazaribagh. He said he was the lone hardcore extremist left in the frontier area after the hardline Maoists were killed and captured.

Along with collecting the levy, he was spreading panic among the people by pasting posters, SP Ratan said.

“He was trying to strengthen the organization as well. There are as many as 60 cases pending against Yadav in different police stations,” he maintained.