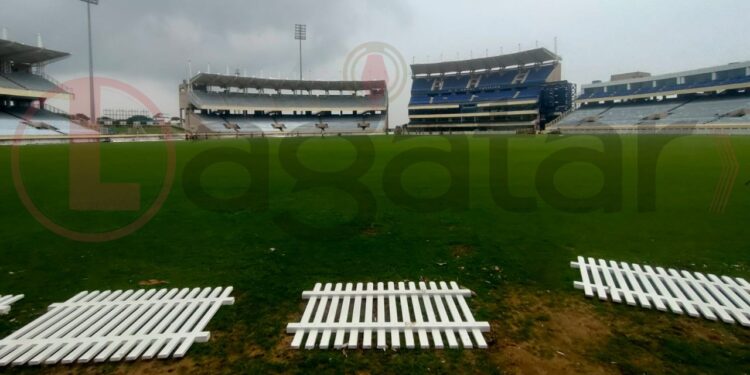 According to JSCA sources, the fencing has been brought from Australia and requires less maintenance as compared to the traditional wooden fencing which requires extra care every season including monsoon.

The former president of JSCA late Amitabh Choudhary was the one who suggested the association install picket fencing in the stadium.

JSCA secretary Debashish Chakraborty informed that the picket fence will be protected from termites and also will not be required to be painted every year. Moreover, it will help in enhancing the beauty of the stadium.

Notably, JSCA stadium is the only stadium in the country to have two hill stands (East and West) which has a grass lawn as seen in the stadiums such as Wanderers Cricket Stadium in South Africa and Hobart stadium in Australia.

He added that JSCA stadium is the second stadium in the world after Lord’s in England to install WPC picket fencing.

Moreover, the Ranchi ODI between India-South Africa will be a tribute to the former president of JSCA late Amitabh Choudhary, who passed away on August 16 this year. He was the one who did all the strategic planning regarding the ODI to be played in Ranchi.

The teams will arrive in Ranchi on Sept 7 and stay at Hotel Radisson Blu. The JSCA secretary added that there are a total of 42 pitches (in and outside the stadium) for the players to practice.

He added that to make the ODI match a success, the association is working with 46 agencies involving around 240 members from JSCA.