JSMDC: Where contractual employees run mines in name of relatives

Ranchi, May 14: The Jharkhand State Mineral Development Corporation (JSMDC) seems to be generous enough to grant mining leases even to family members of contractual employees.

According to official records, the stone and morrum mining lease was issued in favour of Bidya Sharma in Garhwa district. Bidya Sharma has been mentioned as the wife of Ashok Kumar, a native of Dindir, post office Haspura of district Aurangabad in Bihar. 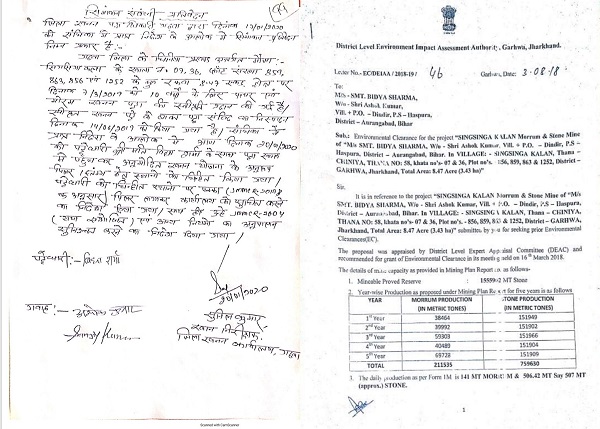 The mining site is situated at Mauza Singsingkalan under Chinia block, Panchayat Barwadih of the district.  The mining site is registered under khata numbers 7 and 36 having plot numbers 859, 863, 856, and 1252.

The phone number 896XXXX392 is said to be registered in the name of Ashok Kumar. Room number 106 of Nawneet Hotel, Garhwa has been used as the official address in the said application.

When asked, an employee of the hotel said that apparently some computers are kept in the said room of the hotel. “But I don’t know who they are,” said the employee who responded to the phone call. Ashok Kumar did not reply to the WhatsApp message.

When asked, an official of the mining department of Garhwa said that they know Bidya Sharma as the wife of Ashok Kumar.  ‘But is this legally and morally wrong if someone’s wife gets a mining lease,” the official said.

Who is Ashok Kumar?

Ashok Kumar was booked under sections 420, 379 and 411 of IPC and section 54 of JMMC Rule in Ketar PS Case No. 04/2019 in Garhwa district. The FIR was registered as he was allegedly involved in forging a single used challan multiple time. But despite that, he was promoted and given important responsibilities.