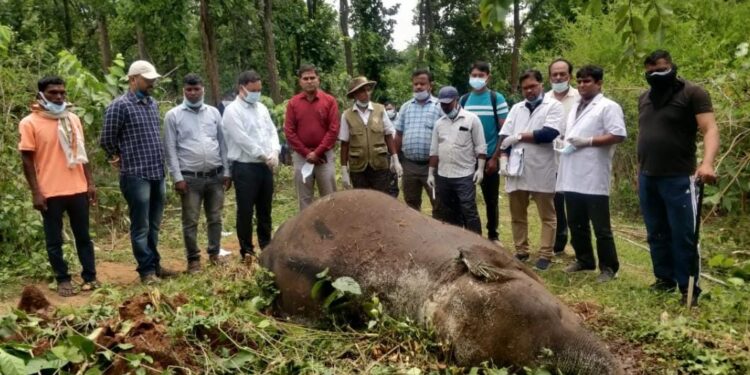 Daltonganj, July 3: The dead body of a sub adult tusker with both its tusks missing was found in Balumath jungles of Latehar district resulting in widespread anger.

Kumar Ashish, conservator of Palamu forest has confirmed the death of the tusker and claimed that both its tusks were missing. Ashish said the tusker was found dead last night itself and the officials were combing the area.

The site of the death is in Renchi, the protected forest of Balumath in Latehar district which also falls close to the district of Chatra. Notably, it was the same tusker that was earlier found limping and had undergone a long treatment on its left hind leg.

Touring veterinary officer Dr Ajay Kumar was specially brought down to the jungles of Renchi from Bokaro for his treatment under orders of the state government.

A lagatar24.com correspondent spoke to one of the doctors, Dr V S Dubey, also a 2012 batch IFS officer, who performed the post-mortem on Sunday.

Dr Dubey said the tusker had no external injury or wound. There were no scars or holes in its body.

Explaining the reason for its demise, Dr Dubey said, “There was definitely internal injury. It was severe. There was a pool of blood inside the body.”

The internal injury was near the mammary glands of the tusker. The bleeding was very profuse, Dr Dubey added.

Dr Dubey feared that the serious internal bleeding might have led the tusker to go into shock that led to its death. Conservator Ashish said, “The poachers removed the tusks after the elephant’s death.

The location where this elephant was found dead is beyond the territory of the PTR. Sources said Dr Ajay Kumar and Dr R Jojo had taken utmost care of its treatment.

Apart from Dr V S Dubey who performed the post mortem there were others namely Dr R Jojo, Dr Om Prakash Sahu, Dr S Kullu and Dr S Kasi who were in the team of Dr Dubey while the post mortem was performed.