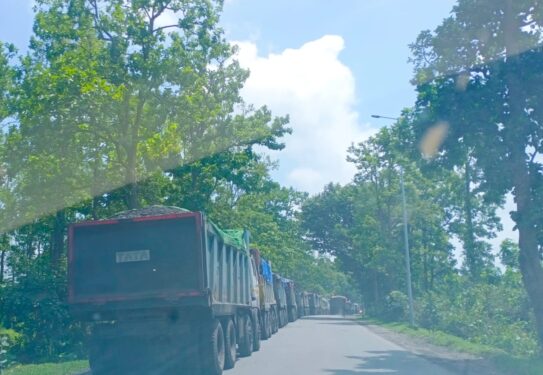 Ranchi, Nov 24: The Jharkhand forests department continues to issue permits to state-run NTPC Ltd for ferrying coal on about 18 kms road in forest area in Hazaribag despite the central forest ministry’s permission for the same expiring on 28 June 2022.

The Union Ministry of Environment, Forest and Climate Change, in November 2020, had allowed NTPC to use the forest road for transporting coal with measures to control pollution till 28 June 2022 by when it was supposed to build its conveyor system.

The Union Ministry had stated that the decision related to the Pakri Barwadih Coal Mine was based on recommendations and legal undertaking submitted by NTPC for building the conveyor between crusher point at mine end and Banadag railway siding.

While senior officials in the state forest department deny any role for the department, the Forest Division of Hazaribag West has agreed to the fact that it continues to issue permits for transporting coal both through conveyor belt and by road transport.

The state forest officials passed the responsibility on NTPC and state pollution control board for giving clarifications. The NTPC officials merely shared the standard operating procedure stating that “coal may be transported by road with tarpaulin covered trucks”, they failed to share any extended permission to use road from the central ministry.

And, the state pollution control board officials said that their permission is not required to transport coal in the forest area. However, they did confide that the NTPC continues to use roads to transport coal on trucks. “We just ensure that their trucks are covered up, there is no overloading and that they use water sprinklers as per the consent to operate (CTO),” said an official on condition of anonymity.

It may be noted that the central public sector undertaking is carrying out a 15 million tonnes per annum coal mining project in Barkagaon block of Hazaribag district through its mine developer and operator (MDO) Thriveni Sainik Mining Pvt Ltd.