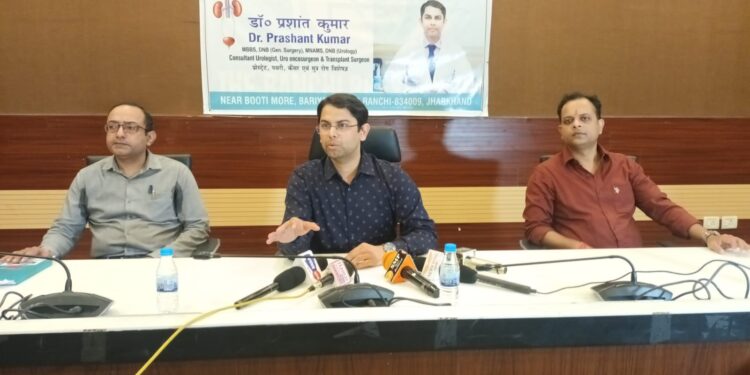 Ranchi: In a first, Dr Prashant Kumar of Urology Care Clinic has successfully operated on Adrenal Gland Tumor through Laparoscopy Surgery in Jharkhand and Bihar.

During the press conference held at the Press Club, Dr. Prashant said that 69-year-old Puran Mandal, a resident of Dhanbad, was operated on by laparoscopy method and today he is healthy. He said that a tumor above 5 cm causes cancer. In Puran Mandal’s case, that tumor had become cancerous. He said that to remove the tumor, three small holes of 5 and 10 mm were made and pulled out. The size of the tumor was 8 cm.

The successful operation of Pelvi Ureteric Junction Obstruction (PUJ) of 2-year-old Naeem Ansari, a resident of Govindpur in Dhanbad district, was also done by laparoscopic surgery.

Dr Prashant said that the condition of the child was not improving even after treatment at many places. Because of this his kidney was damaged to some extent, whose successful operation was done in Urology Care Clinic.