A mining lease issued for Tilabani hill in Purulia, in contravention of the 2006 Forest Rights Act, has drawn strong protests from local community, who fear loss of livelihood and destruction of ecosystem 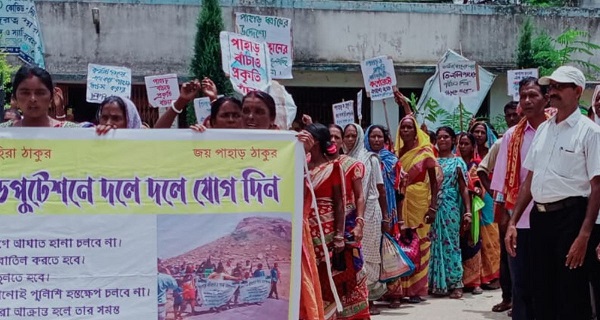 Purulia, West Bengal: The Adivasis of four villages adjoining Tilabani hill in Purulia saw it coming. As the officials from a private firm landed on the hill to commence mining operations, they fought tooth and nail, forcing the visiting party to pack up. The June 3 incident necessitated suspension of work, and led to the arrest of several villagers, who were subsequently released on bail.

It was on January 10, 2019, that the West Bengal Mineral Development & Trading Corporation Limited leased out the hill to Kolkata-based Todi Minerals Private Limited. As per the agreement, Todi Minerals could mine granite from the place.

“How can we allow this? We will all lose our income if the hill goes to miners,” said Swapan Mondal, a forest guide on Tilabani hill. Farashibon, Madhabpur, Lebabona and Tilabani villages have a combined population of around 10,000. Every household here is dependent on the hill in one way or the other.

“November to March is the peak season for us. We make around Rs 20,000 per week during this period. I mostly work as a guide for agricultural science students, who attend nature study camps here to understand the flora and fauna of the region. We get to see students from colleges across the country,” Mondal said.

Swarup Mahato’s family has been residing in a village located near the hill for several generations. “I have a grocery shop near the hill. I also work as a forest guide in winters. People here meet ends by selling tendu leaves and medicinal plants collected from the hill,” Mahato (26), an Adivasi, told 101Reporters.

According to Rakesh Karmakar, a farm owner and cattle rearer, tendu leaves are used to make bidi, which earns them at least Rs 5,000 to 10,000 a month. Besides, grasslands near the hill provide fodder for cattle and poultry. 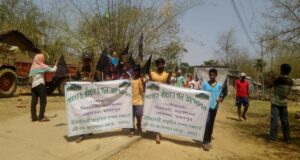 Tilabani panchayat pradhan Sucheta Tudu (34) has been actively leading the agitation against Todi Minerals and roping in women for the cause. “Women resent this snatching away of sources of livelihood. They took part in several rallies, waving black flags in protest,” Tudu told 101Reporters.

As per the Forest Rights Act (FRA), 2006, the panchayat’s consent is necessary before passing any work order. As that did not happen, the villagers submitted a written memorandum to the district magistrate at Hura demanding that all mining activities be stopped.

“Representatives of Todi Minerals approached us and sought a meeting with the panchayat representatives. This should have been done earlier. Even the government should have sent officials to meet us. Unfortunately, that did not happen. Nevertheless, we have made it clear that we will not support mining on Tilabani hill as it will render the area barren and cause pollution, besides destroying the ecosystem,” Tudu affirmed.

The local community has sent letters of protest to all government officials, including the block development officer at Hura, the district magistrate and the police authorities concerned. “We are now told that the deal was signed long ago. But we knew nothing about it!” said Swarup Mahato.

To fortify their resistance, the tribal communities have formed the Tilabani Pahar Bachao Committee, which is fighting in courts on their behalf. “The villagers do not trust the government or the police. They have decided to camp on the hill round-the-clock until the court pronounces its verdict. Women guard the post during the day, while men stand vigil at night,” said panchayat pradhan’s husband Hakim Chandra Tudu.

Explaining the local sentiment around Tilabani hill, Bimala Karmakar, an active protester, said, “We worship the deity Barang Buru, who, we believe, dwells on the hill. For us, this battle is to save her. We cannot let anyone destroy the hill and our goddess. She is the provider of everything that we get from the forest.” 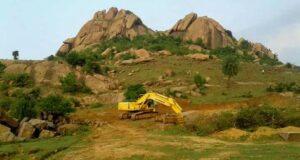 Courts to the rescue

Advocate Somnath Patra, who is fighting on behalf of the community, said four locals were arrested on charges of unlawful assembly and causing hindrance to mining activities on Tilabani hill, after an FIR was registered against them at Hura Police Station based on a complaint lodged by Todi Minerals.

The case was registered under IPC Sections 506, 427, 331, 341, 323 and 34, which relate to punishments for criminal intimidation, voluntarily causing hurt, wrongful restraint, causing loss or damage and more. The locals were released on bail a couple of days later.

“We have moved to the Calcutta High Court, and now await the hearing. The way I see it, we are set for a lengthy court battle,” said Patra.

When contacted, Todi Minerals refused to comment on the issue citing court proceedings.

When quizzed about the issue, Purulia District Magistrate Rajat Nanda said, “Mining activities in the area are put on hold. I am looking into the matter. We will verify the claims made by both parties.”

The local community, meanwhile, has received support from various organisations, including the Paschim Banga Bigyan Mancha.

As per the FRA, tribals living on forestland have every right to protect, regenerate, conserve or manage community forest resources they have traditionally protected and conserved for sustainable use.

Explaining the logic behind the Act, environmentalist Tapan Saha said, “Since these communities are dependent on forest reserves for their livelihood, their conservation is of utmost importance to them. The Central government has the right to divert forest lands for the purpose of building schools, hospitals, anganwadis and roads for the benefit of the local community. But decisions are subject to the consent of panchayats or gram sabhas.”

Climate activist Sourav Chakraborty, who has been working closely with the Paschim Banga Bigyan Mancha, told 101Reporters that police played an active role in quelling the protests. “The villagers are bent on stopping mining as water from a lake situated on the hill is used for farming.  Tilabani is no barren stone-ridden hill. It has a lot of farmland, and is a precious watershed. One cannot sell it off,” he said.

Under the new rules replacing the 2003 ones, the Central government can give its final approval under Section 2 of the Act for any “diversion, assignment of lease or de-reservation” (use of forest land for non-forest purposes), after which the State or Union Territory can issue an order. The new system of Centre getting an upper hand in approvals is quite contrary to the earlier practice, wherein state governments would first look at the proposal (mostly through gram sabhas) and provide their consent.

“Unless we act now, this will destroy the biodiversity of the country at large!” Saha pointed out.

(The author is a freelance journalist and a member of 101Reporters, a pan-India network of grassroots reporters.)