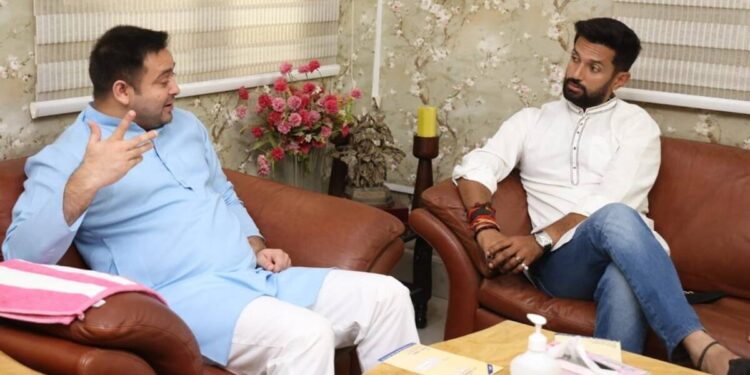 “I have met Tejashwi Yadav to invite him to ‘Barkhi’ of my father, to be held on September 12. I will also meet Lalu Prasad Yadav tomorrow in Delhi,” Paswan was quoted as saying by news agency ANI. “My aim is to invite everyone who has worked with him to pay their tributes. I hope to meet the CM as well,” Paswan added.

The meeting comes after RJD supremo Lalu Prasad Yadav had suggested an alliance between the LJP and his party, stating that Paswan should team up with his son Tejashwi. Dodging queries about Yadav’s statement, Tejashwi stated “We can’t say anything after what Lalu ji had said.”

The LJP leader is currently embroiled in a bitter dispute with his uncle and Union Minister Pashupati Kumar Paras to claim the legacy of his father. Amid the tussle, Paswan announced a mega event in Patna to mark the first death anniversary of his father, inviting top national leaders like Prime Minister Narendra Modi, Home Minister Amit Shah and Congress president Sonia Gandhi.

Meanwhile, the young LJP leader has been making moves to mobilise support for himself amid the infighting. He had recently launched an “Aashirvad Yatra” — to get people’s blessings — on the occasion of his late father’s birth anniversary at Hajipur, his father’s constituency, currently represented by Paras.