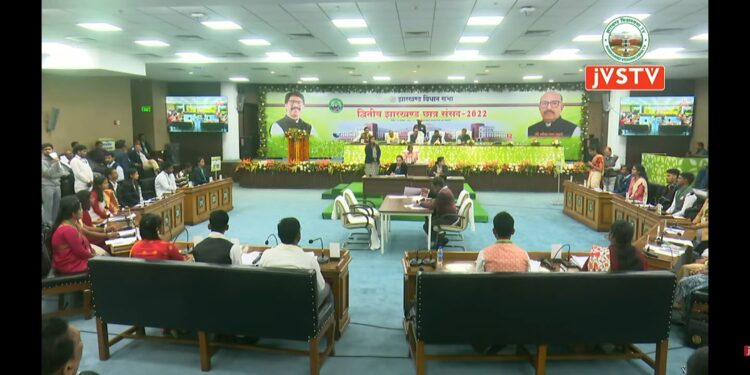 Ranchi, Nov 24: Today was not a regular day at the Jharkhand Assembly. The seats of MLAs were occupied by college and university students from across the State. And they asked questions mainly related to the traffic chaos as part of the second session of the Chhatra Parliament (Chhatra Sansad).

The session saw the student legislators focus on road safety and accidents along with other issues. The young legislators also passed the Jharkhand Road Safety Bill 2022 and voted that it be restored. The speaker, on the occasion, was Mariyam Khalkho, Geeta Shreya was the Chief Minister, and Sakshi Priya was the Opposition Leader.

Meanwhile, the Question Hour began with Khushi Lal Pandit of the ruling party questioning his own party members regarding the Hit and Run Compensation plan, and asking if it was offering help as promised. The minister in-charge replied in the affirmative and said a sum of Rs 25000 is provided to the families of those that die in road accidents. He further added that a total of 548 people in the past five years have been given the compensation.

Pandit, however, did not seem happy with the answer and commented that 548 people in five years mean nine people per month are provided with compensation; however, the number was not enough as compared to the number of accidents reported per month all over the state.

Other questions regarding traffic included a question by Soni Kumari, who pointed out issues related to traffic in Hazaribagh. Notably, here amid the lack of a Master Plan for the city, several narrow roads ensue long hours of traffic. She asked for a time period within which the master plan will be implemented, and in the meantime, she asked for an optional plan to curb traffic issues.

Another issue raised was the issue of roads being broken up in order to set up pipelines in Chaibasa. Aditi Raj Lakshmi said that broken roads are not fixed on time, which results in accidents and other traffic-related issues.

Meanwhile, Vivek Kapoor had questions regarding electricity and load shedding. He also pointed out the pending bills worth several hundred crores that are yet to be paid off. Rudra Pratap Singh questioned the Gramin Vikas Department regarding several poor and BPL families still waiting for their pucca homes as promised by the government. He also pointed out that in today’s day and age amid such high prices, only Rs 1,20,000 – Rs 1,30,000 are not enough to build a house of three rooms.

Other questions raised in the question hour include Sachin Kumar’s question about the trauma centre built in West Singhbhum, which is yet to begin normal functions and Govind Kumar Mehta’s question about the garbage, used machines and cars that are piling up in different departmental offices and police stations that need to be sold off to junkyards for recycling. Kakoli Karmarkar further asked if there were any plans to build a Women’s College in Nirsa, Dhanbad and brought up the lesser number of women taking admissions in the already present colleges in the region.

The zero hour round saw Hemant Kanduliya demanding monetary relief for those whose houses were lost in a wild elephant attack on November 23. Puja Shekhar demanded that compensation be paid to those within the next 10 days, who lost their houses in the heavy rain within the last few days. Sakshi Priya, on the other hand, called out the government on the deaths of 15 children in government hospitals due to either the negligence or shortage of doctors and medical staff.