Dehradun, Sept 24: Vinod Arya and Ankit Arya, the father and brother of the primary accused Pulkit Arya, were suspended by the Bharatiya Janata Party (BJP) on Saturday in connection with the murder of 19-year-old resort receptionist Ankita Bhandari. They have been removed from the party with immediate effect. 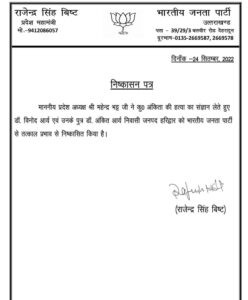 Pulkit Arya was detained for the murder of the young resort receptionist in Pauri district, Uttarakhand, which is close to Rishikesh. Pulkit and her family had reported Ankita Bhandari missing on Monday, but police claimed it eventually came out that Pulkit and two staff members, resort manager Saurabh Bhaskar and assistant manager Ankit Gupta, had killed her. They two have also been detained.

Police haven’t confirmed claims that the teen was coerced into prostitution, although there are allegations to that effect.

Earlier, parts of the resort were burned down by irate locals. Videos taken at the scene show black smoke emerging from broken windows. According to reports, the fire was quickly put out.

The resort is owned by BJP leader Vinod Arya's son Pulkit Arya. Three accused, including Pulkit, have been arrested in connection with the murder case. pic.twitter.com/7Zx0T6HJIB

Following Pushkar Singh Dhami’s orders, the resort was demolished throughout the night by the local administration.

This morning, the woman’s body was found in a canal. Amidst accusations of inaction “because the accused’s father belongs to the state’s ruling party BJP and RSS,” police are looking into the case.