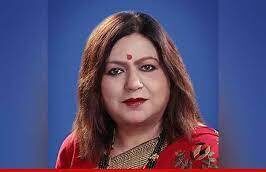 Ranchi, Aug 30: Seema Patra, a BJP politician in Jharkhand, was suspended on Tuesday following accusations that she had cruelly abused a domestic helper.

However, Seema Patra has not been arrested yet.

Interestingly, Patra was a part of the women’s wing of the BJP’s national working committee. Maheshwar Patra, her spouse, is a former IAS officer. She was also leading the BJP’s campaign Beti Bachao, Beti Padhao in Jharkhand. Earlier, she was part of Congress.

The victim, Sunita, is seen on a hospital bed in the horrifying videos. She is unable to sit up by herself, and several of her teeth are missing. According to reports, the injury marks on her body indicate that she was assaulted repeatedly.

Sunita, who is now 29 and from Gumla, worked for the Patras for last ten years. She travelled with their daughter Vatsala to Delhi for job purposes. Vatsala and Sunita returned to Ranchi around four years ago.

The victim claims that Patra tortured her viciously for the following six years. Sunita says that she was beaten with a hot pan and rods and had her teeth broken out while speaking through excruciating agony.

Sunita further said that she was subjected to torture as ‘punishment,’ although she was unable to identify her mistakes.

The woman claims that Ayushman, the son of Seema Patra helped her. According to reports, Ayushman told a friend Vivek about Sunita’s situation and requested his assistance. Then, as a result of his friend filing a police report, Sunita was saved. She is currently receiving treatment at RIMS in Ranchi.