Candid Comments: Hemant Soren brings down Congress on knees, puts BJP on back foot in Jharkhand 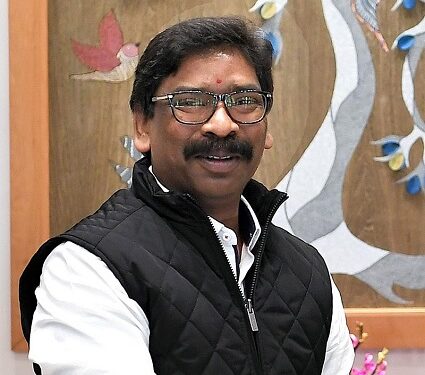 Ranchi, Sept 24: Call it irony. The Congress, which had opposed the domicile policy based on 1932 cut-off brought by the BJP government led by Babulal Marandi in 2002, is now singing praises for Chief Minister Hemant Soren for approving a similar policy to define Jharkhandis. The RJD, another ally, which has got its support base among the non-tribals only, is also supporting the JMM.

The BJP, which discarded Marandi’s policy, which had triggered large scale violence and social unrest in 2002, is now on the back foot. It has neither directly supported nor opposed the policy.

So, faced with a political crisis and serious corruption charges, Chief Minister Hemant Soren, who completed 1000 days in office today amid trial and tribulations, has definitely shown a leadership quality and taken the fight to the BJP keeping his flock intact.

First, take the Congress. In the initial years of the government, the Congress MLAs frequently flexed muscle on some key issues. Some Congress MLAs were also threatening to bring down the government. Thanks to his alertness, Soren with the support of the Jharkhand Congress leadership as well as Bengal Chief Minister Mamata Banerjee got three Congress MLAs trapped with cash allegedly taken by them for joining the BJP.

Ironically, another Congress MLA Anup Singh filed an FIR against his own party colleagues which led the Bengal police to arrest them. Not only that. Congress CLP leader and Parliamentary Affairs Minister Alamgir Alam filed a case with Speaker Rabindra Nath Mahto, under the 10th Schedule for their disqualification for a purely criminal act. One does not know the ultimate fate of the case, but the Congress has put the fate of its three MLAs in the hands of the Speaker, a JMM MLA.

Moreover, the fate of Pradeep Yadav, who joined the Congress after having been expelled from the JVM, also continues to be on the tenterhook. The Speaker is yet to decide the anti-defection case filed against him. He has also not delivered his order on BJP leader Babulal Marandi perhaps, according to sources, is waiting for the EC decision on Hemant Soren.

Soon after the news of his disqualification in the office-of-profit case spread, Soren first wanted to send the Congress MLAs only to Raipur to save them from poaching. The JMM MLAs accompanied them only when some of the Congress MLAs protested against shifting to Raipur alone. Soren in alliance with Chhattisgarh Chief Minister Bhupesh Baghel well protected his MLAs.

As the suspense over his future in the Assembly continued, Soren outmanoeuvred the Opposition to win the trust vote (the BJP boycotted it), staving off any uncertainty about his government’s fate, at least for the time being as Governor Ramesh Bais’ order on his possible disqualification is still pending.

Soon after, Soren fired his ‘bramhashtra’ of the 1932 domicile and 77 reservation for the underprivileged, there was murmuring from two-three Congress MLAs, but that has been silenced. The Congress, at the cost of its existence, has thrown its support rock and solid behind him

“Now neither the tribals nor the anti-tribals will vote for us. For the JMM will take full credit for enacting the 1932 domicile policy and 77 percent reservation,” feared a senior Congress leader requesting anonymity.

Also, Hemant Soren has so far has ducked all the legal actions against him though the investigating agencies like the CBI and ED have gathered adequate proof of corruption against him and his family members.

But then, there is a popular English proverb that says “cometh the hour, cometh the man” – the idea that the right leaders will come to the fore during times of crisis.

Fearing that he will be disqualified and may face fresh elections, he rushed most of his election promises fulfilled like old pension scheme, bonanza for para teacher and anganwadi workers, Sarva jan pension yojna among others even if the state coffer was not ready to bear such expenses.

Remaining subdued for some time after the BJP lodged a complaint against him for allotting a mine to himself and the ED probe against then Mining Secretary Pooja Singhal, he has emerged a different man exuding confidence. In fact, the JMM had not been serious on the 1932 cut-off date for defining Jharkhandis all these years. “Had it been so, it would have challenged the Jharkhand High Court order in the Supreme Court,” says social activist Sanjay Basu Mallick. Even a few days back, he told the Assembly that the employment policy based on 1932 domicile policy will not stand the judicial scrutiny.

After the crisis hit him, Soren changed his working style. “Earlier, he had been perfectly surrounded by private persons. Bureaucrats had no easy access to him. As a result, the movement of files was slow. Now in recent months, he has changed his style and remains available for the bureaucrats. As a result the decision making has become fast,” pointed out a senior official.

Now, to the bewilderment of many, the BJP has gone on defensive on all these issues fearing backlash if they tell the tribals and OBCs that Hemant Soren was playing with their sentiments as executing these policies is next to impossible. The BJP is not even going to tell people in simple terms that two policies will never be able to be implemented given the constitutional position.

“We feel that Hemant Soren will be self exposed when the people confront him for the 1932 cutoff domicile policy and 77 percent reservation during elections. His alibi for putting the two laws in the Ninth Schedule will not work. So, why should we burn our fingers,” said a senior BJP leader.

It was left for BJP vice president Raghubar Das to oppose the two policies strongly yesterday. But his voice does not carry much weight after he lost elections and the BJP, under his leadership, lost power in the 2019 assembly elections during the Modi wave.

If the BJP bats for the 1932 cut off policy, it might anger its vote base among non-tribals and if opposed it will further alienate the tribals. The BJP had got only 2 out of 28 seats reserved for Adivasis in the last assembly elections.

No wonder, the silence of the BJP-Congress has provoked Independent MLA Saryu Roy to remark, “When the national parties get confused in front of the regional political agenda, then the people affected by this agenda have to raise their voice of their rights.”

A BJP leader dismissed Roy’s call, saying the latter has to take care of one constituency. “We have to manage 81 constituencies,” he signed off.