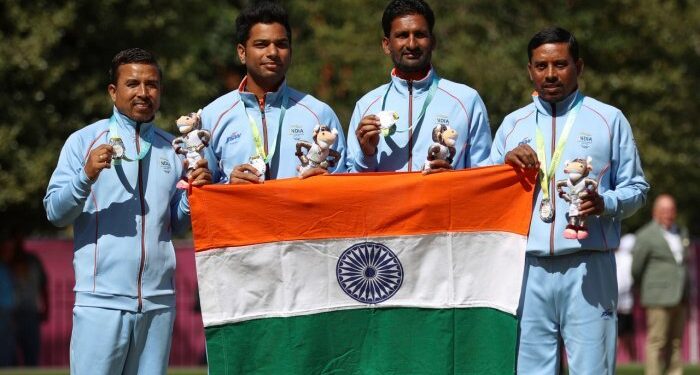 Interestingly, three of them are from Jharkhand and had trained under Madhukant Pathak, President of the Athletics Federation of India.

Here’s all you need to know about the four lawn bowls stars who have assured India of their second medal-ever in the sport in Commonwealth Games history.

A veteran of the Commonwealth Games having made his debut in 2010, Sunil Bahadur hails from Jharkhand. He is a six-time national champion and was also crowned the Asian Champion in 2012. He also has a gold medal from the 2017 Asian Men’s Triples Championships and a bronze in the Asia Pacific Championships.

Kumar competed in his first nationals in 2008, winning gold. Born in a middle-class family in Jharkhand, Kumar also represented India in the 2010, 2014, and 2018 Commonwealth Games. He is employed by the Jharkhand Police.

Grandson of a freedom fighter, Singh made his national debut in 2008 winning a silver medal. He was introduced to lawn bowls during his graduation days in Jharkhand. His father is a retired police officer while his brother works for the Indian defense.

He is an Indian international lawn bowler, a two times Asian Champion and has represented India at three Commonwealth Games. In 2014 and 2018, he competed in the 2014 Commonwealth Games[2] and the 2018 Commonwealth Games. Singh has twice won a gold medal at the Asian Lawn Bowls Championship, once in 2016 in the fours and the following year in 2017 in the triples.

Singh’s school had a practice lawn bowls ground during the 2010 Commonwealth Games, from where he got attracted to the sport while still in school. He won his first national medal during his debut in 2011 and has multiple international medals against his name.

Notably, the men’s fours had earlier beaten Canada 14-10 in the last eight stages. Against England, who have 20 Commonwealth Games gold medals in lawn bowls and five in the men’s fours, India led 2-0 after the first two ends.

Earlier, the women’s fours team’s historic gold medal victory at the Commonwealth Games in Birmingham pushed the comparatively obscure and derided sport into the public spotlight. The men’s team then defeated England, which possesses the oldest remaining Bowling Green in the world that dates back to the 13th century, to go to the fours final.