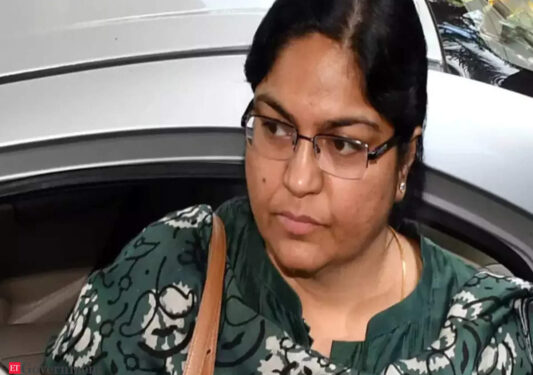 Ranchi, Nov 24: The Enforcement Directorate (ED) has alleged that jailed IAS officer Pooja Singhal had tried to obtain a false medical certificate for her Angiography to get the bail in MNREGA scam but it foiled her attempt. This was disclosed by the ED in the counter affidavit submitted before the Jharkhand High Court regarding her bail petition which was rejected by the court a few days back.

The court in its detailed order has referred to this allegation raised by the ED against Pooja Singhal. The ED claimed that a false certificate was tried to be obtained on medical grounds to obtain the benefit of the medical certificate. But she was not able to succeed due to the presence of the authority of the Enforcement Directorate). The ED stated that her medical report suggests that she was well oriented, stable and fit medically and psychologically.

Amit Kumar Das who appeared on behalf of the ED informed the court that he was told that maneuvering was being made of having a false medical certificate of Angiography of Pooja Singhal. But the same could not be possible due to the presence of ED officials.

The ED further told the court that she was examined by a Medical Officer of the State and she was found well oriented and stable and she was not having any medical issue. She was found healthy.

Pooja Singhal was arrested in May this year days after the ED raided her premises as well as her chartered accountant Suman Kumar Singh and recovered Rs. 19.76 Crores (approx) from premises of Suman Kumar Singh. She is currently at RIMS for her treatment.

Meanwhile, another accused of the ED, Amit Agrawal filed a petition before the Supreme Court to get relief in cash for the PIL case in which he was arrested by the ED.  The SLP has been listed for hearing and it is scheduled tomorrow. One of his close associates said that Amit Agrawal had filed a quashing petition before the Jharkhand High Court on the ground that he was the complainant against advocate Rajiv Kumar in the extortion case and Rajiv Kumar was arrested along with cash Rs 50 lakh following his complaint and a trap was laid by the Kolkata police. But the ED made him an accused. At Jharkhand High Court the ED sought three weeks of time to file the reply and the matter was scheduled for hearing on November 30.

“We could not get instant relief from the High court and the matter was deferred for a longer period. In the meantime, Rajiv Kumar got bail but Amit Agrawal is suffering. In order to get instant relief he has approached the Supreme Court,” said a person acquainted with the case.