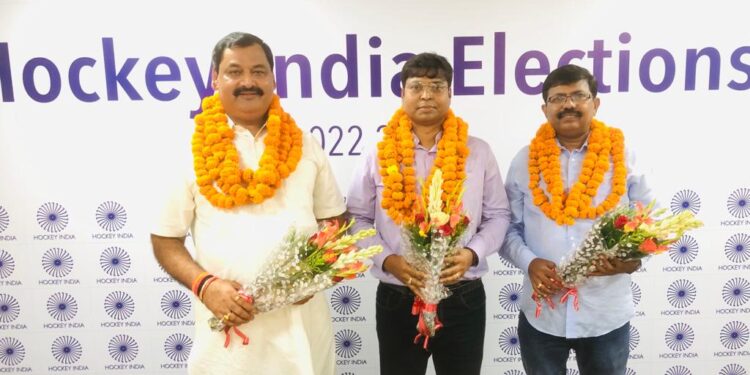 Ranchi, Sept 24: The president of Hockey Jharkhand Bhola Nath Singh was elected unopposed as the general secretary of Hockey India on Friday. Moreover, a former Indian player from Jharkand Asrita Lakra has been elected as Hockey India’s executive committee member.

After being elected as the general secretary of Hockey India, Bhola Nath Singh interacted with the media and expressed his feelings.

“It is one of the proudest days of my sports career. First of all, I would like to thank the almighty for the blessings in my life. My heartfelt thanks to Hockey India for trusting me and giving me such a responsibility. I would like to thank my family for their continued support. I would like to extend my heartfelt thanks to the entire team of Hockey Jharkhand, especially the Executive Board members and all my friends, well-wishers and the entire Hockey and Wrestling fraternity and supporters,” he informed the media.

He added that as the president of Hockey Jharkhand, he has given his best to work towards the prestige of the players and their honour, and respect and provide all kinds of facilities to them. He added that he is looking forward to doing the same as the general secretary of Hockey India.

In September 2014, Bhola Nath Singh was elected as the President of Hockey Jharkhand. He started his strategy for developing hockey as soon as he took office and started a tour of the area where there are hockey players.

In the last eight years, he has taken Hockey Jharkhand to new heights as the team produced various national international players during that time.

The trainers of these areas got discussions about modern hockey and organized special training camps for hockey players in Simdega and Ranchi. The hockey of Jharkhand got the benefit of this.

During his tenure for Hockey Jharkhand, two former international players, Olympian Mr Sylvanus Dungdung and Sumrai Teta were awarded the Major Dhyanchand Award by the Government of India in 2016.