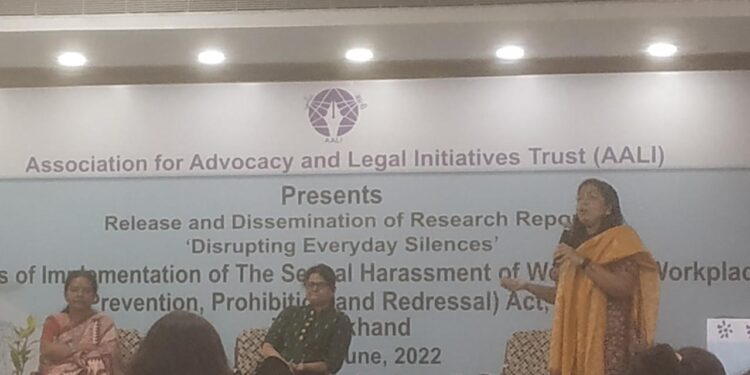 Ranchi, June 27: The Association for Advocacy and Legal Initiatives Trust (AALI) on Monday released a report on the status of implementation of the Sexual Harassment of Women at Workplace (Prevention, Prohibition and Redressal) Act, 2013 in Jharkhand between the year 2013 and 2021.

While addressing the media, Executive Director of AALI, Advocate Renu Mishra said, “We researched the implementation of the act against sexual harassment of women at workplaces in the state and compiled a report on the same. We organised the event today to release the report.”

When asked of the report she said, “We have realised that there are several aspects that can be improved. Every district should have a local committee for this, however, only 14 districts have one till now. Even these committees are not functional in the way that is required.”

“Along with this, every workplace either government or private with more than ten employees should have an internal committee that meets every three months and discusses over present conditions. Awareness seminars should be conducted on regular intervals, contact information of the committee members should be displayed in the workplace. However, this is not the case here,” she added.

Releasing the report, Mishra said, “Women have to face sexual harassment in every walk of life. However, they face severe harassment in workplaces. These forms of harassment may either be direct or subtle.”

She further said, “Women often become mediums to protect the accused in such cases. The culprits bring out their wives or mothers to save themselves from severe punishment. Here women help such culprits.”

Many times, in public transports, girls shrink into corners trying to avoid wandering hands of perverts, everyone notices if such perverts attack women, however, no one complains. Infact, people turn their heads the other way, as if they have not noticed such a thing happening,” Adv Mishra said.

Talking of the survey for the report, she said, “We saw government buildings with girls’ washrooms without doors, placed right next to men’s washrooms. When questioned over the fact, the officials had supposedly been surprised if it could have created a problem for women.”

She further mentioned the missing amenities for women needed in a workplace for women. She further suggested that women become shameless, when asking for their basic rights at the workplace. She also mentioned that a woman should never be responsible for saving themselves from sexual harassment and that even men need to realise the requirements of women.

When asked of her next step, Mishra said that she plans to knock on the doors of the government and present them with the report. She further plans to demand proper facilities for women in workplaces, and that the government implement the act in a more assertive manner. Over the question of the condition in Ranchi, Mishra said that Ranchi district does have a committee but isn’t as functional as required by the law.

Panalists on the occasion included Sachi Kumari, founder of Chotanagpur Sanskritik Sangh, Richa Chaudhary of AFL India Limited and Renu Mishra. The panellists discussed the report with the women present and answered their queries regarding the methodology and other aspects of the report and the said Act. Several women of different organisations, members of AALI were present on the occasion.