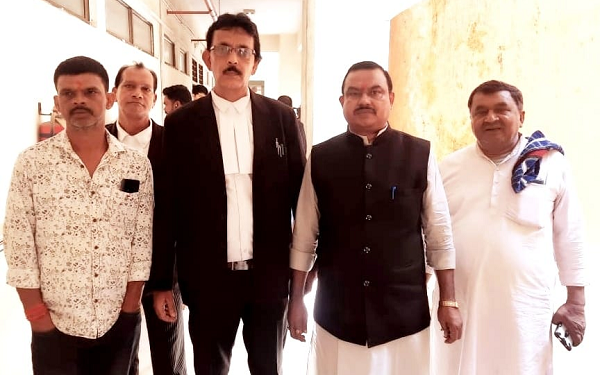 Ranchi, Sept.22: Central president of the Jharkhand Navnirman Manch (JNM) Kailash Yadav accompanied by  two members of the organization, Pradeep Tiwari and Ramkumar Tiwari, and advocate Deepak Shrivasatava today appeared before the SDO court to reply to the notice issued to him under section 107 of Cr.PC.

Yadav sought time from the court and later deferred hearing in his matter till September 28. During his appearance Yadav and his organization members assured the court that there is no threat of breach of peace from the activities of the organization and the notice was uncalled for.

After Yadav returned from the court he said it was his democratic right to oppose the anti-people policies and unconstitutional decisions of the government and he will continue to keep on exercising his right. He said he had exercised his fundamental right of freedom of speech and expression and his voice cannot be suppressed through the notices.

Yadav said the administration under government pressure has taken a biased action of issuing a show cause notice. While it is well known that Khatiyan holders in different parts of the state are behaving in an indecent manner since the Hemant Soren government cabinet had decided to make 1932 Khatiyan a base for identifying locals, any words against its is being taken as threat to peace and one sided action is being taken, he added.