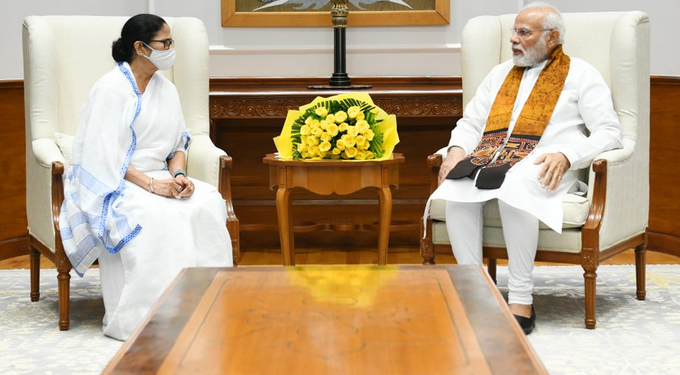 New Delhi, Aug 5: West Bengal CM Mamata Banerjee reached Prime Minister Narendra Modi’s home in New on Friday for a high-level meeting. The meeting between Bengal Chief Minister Mamata Banerjee and Prime Minister Narendra Modi is expected to cover a range of topics, including the long-overdue payment of the Goods and Services Tax dues. The encounter, which took place just days after the Enforcement Directorate detained Partha Chatterjee, has, nevertheless, generated a lot of rumours.

The minister was considered to be a close confidant of Banerjee and was detained after large amounts of cash were discovered at the home of his assistant Arpita Mukherjee.

For a four-day stay to attend the Niti Aayog meeting, Banerjee is in Delhi. Later today, she will also meet President Droupadi Murmu.

The meeting has become a subject of contention in Bengal between the BJP and the in power Trinamol Congress. Dilip Ghosh, a state-level BJP politician, has been called into custody by the Trinamool for making what they deemed to be disrespectful remarks about Ms. Banerjee and her family.

On August 7, the chief minister of Bengal will be present at a Niti Aayog meeting. On August 7, PM Modi will preside over a meeting of the Niti Aayog governing council where topics pertaining to agriculture, health, and the economy will be discussed. There may also be a meeting with non-Congress opposition figures.

UP: Four drown, several missing as boat capsizes in Yamuna