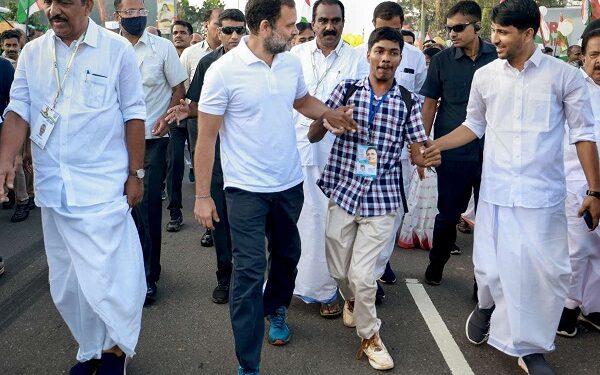 It is a warm sunny afternoon on October 31, 2022 at Kothur, in the Rangareddy district of Telangana State.Papyrus Port is the name of the resort where Rahul Gandhi’s Bharat Jodo Yatra has taken the morning break and is to commence the next leg at 4 p.m. for entering into Hyderabad. A few hundred people are eagerly awaiting to get a glimpse of Rahul Gandhi and wave at him, expecting him to reciprocate. A press conference is going on inside a neatly erected white and spacious tent house as people are trying to overhear the conversation that is going on inside. There are a few other such structures erected for different purposes.The one besides the press conference site is the enclosure where the enthusiastic party workers and a few others including the media persons can have some meals and coffee. Though there are several security personnel and a few members of the state police, not much restrictions are there. At around 2:30 p.m. the press conference ends and the representatives of the media are seen walking out. A few of the Telangana Pradesh Congress Committee members including the President Revantha Reddy are now visible and Jairam Ramesh, the key architect of the Yatra, is also seen around the place. But Rahul Gandhi is not in sight. The area is cordoned off by movable iron railings which the black safari clad security people are handling as and when required. It is already 3:15 and the crowds are flocking outside those railings to see if Rahul Gandhi is around. For a change the security people are not as harsh as they usually are known to be. They are handling the crowd, which is not very big, rather mildly.

As the time for the Yatra to commence approaches  people who are organising the show start moving one after another towards the starting point that is outside the gate of the resort on the main road.A few names have been finalized after due consideration to join the Yatra with Rahul Gandhi and they are all advised to be at the starting point so that so that they are let in within that circle which the security personnel will create with a thick rope surrounding the chosen few and separate the others.

At around 3.50 or so Rahul Gandhi emerges sitting on the front seat of a long white car followed by another similar car. The car stops after 15 yards and Rahul Gandhi alights and enters  into another tent from which he comes out after five minutes. The crowds start shouting Rahul ji, Rahul ji,  but he does not acknowledge that and again occupies the front seat of the car which drives him to the starting point of this leg of the Yatra where otherwise arrangements have been made and co -travellers are waiting.

It is against this backdrop drop that the Congress party needs to evaluate the Yatra. The kind of effort the party is making is commendable but there is a need to calculate the return on investment. It has to be measured in terms of the impact it intends to create and for this the Congress must get the right feedback. The Yatra certainly has increased the visibility of Rahul Gandhi but that may not be enough given the challenge that he has to face from the BJP and even the non BJP non Congress contenders in months to come.

The Yatra has enthused the party workers who now see some hope of the party revival. It certainly will help Congress  gain strength but the point is to what extent. The crowd that is largely seen around Yatra is either that of the Congress workers or the Congress sympathizers and some occasional curious bystanders. This is not going to be enough. The Yatra is a big opportunity and has the potential to reposition the Congress as a formidable challenger to BJP.There can hardly be any doubt that Congress has to be in front of any anti BJP front. The sooner this point is driven home the better it is. But for this Congress has to enthuse the masses also. Telangana is right place for this as it has special significance for Congress. It was Medak in this state that wrote the story of revival of the Congress after it was severely drubbed in the 1977 Parliamentary elections by the Janata party. It was Medak that sent Mrs.Indira Gandhi to the Parliament after the 1977 debacle. How well the Yatra does in this Southern state will have an impact in the adjoining areas of Maharashtra and Madhya Pradesh.As of now common people have not shown the kind of interest that could have been aroused with the little bit of more meticulous planning and marketing. Congress has to reposition itself as the party capable of leading the opposition charge. And Rahul can do it. Certain scenes call for a change in script and many big stars do this. Telangana is a good bet for the Congress.It must not miss this opportunity.