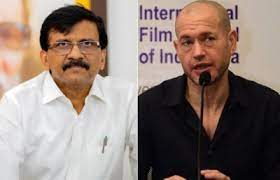 New Delhi, Nov 29: Shiv Sena MP Sanjay Raut on Tuesday came out in support of International Film Festival of India (IFFI) Jury Head Nadav Lapid’s comments on the movie “The Kashmir Files,” claiming that the movie has become more politically charged since its release and has led to more suffering for Kashmiri Pandits.

Nadav Lapid, the head of the FFI jury, described the movie as “propaganda, filthy” during the festival’s closing ceremony on Monday.

“It’s true about the Kashmir Files. There was propaganda by one party against another. A party and government were busy with publicity. But a maximum number of killings in Kashmir occurred after this film. Kashmir Pandits, security personnel were killed,” Sanjay Raut said while commenting on IFFI Jury Head’s remark.

It's true about #KashmirFiles. There was propaganda by one party against another. A party&Govt was busy with publicity. But maximum number of killings in Kashmir occurred after this film.Kashmir Pandits, security personnel were killed: Sanjay Raut on IFFI Jury Head's remark (1/2) pic.twitter.com/j38lbHfan2

“The film has been politicized after its release and has made more Kashmiri Pandits suffer. After the film, more attacks on Kashmiri Pandits started. Will we make a part 2 of it?” Raut said while speaking to reporters.

“Where were these Kashmir files people, when Kashmiri Pandits were being attacked? Some of the money earned from movies should be given to the Kashmiri Pandits,” he demanded.

Lapid can be seen in a viral festival video making debatable comments about the movie. The Israeli director made the remark at the festival’s closing ceremony, one of the festival’s PR representatives told ANI.