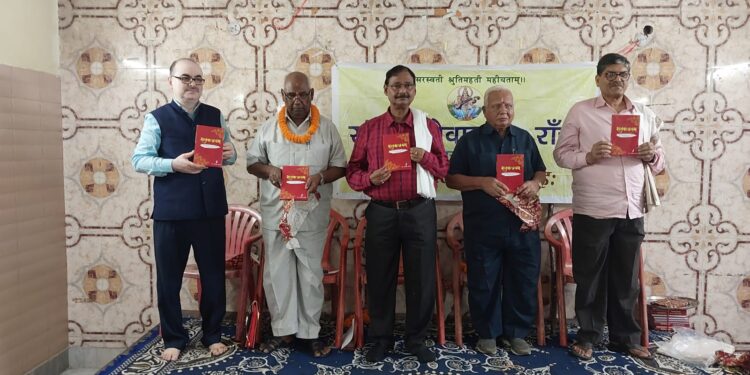 While addressing the audience, Prof Panda said, “Sanskrit is a universal language because its direct or indirect influence on many languages of the world is visible.” He further said that the Vedas, the original texts of Sanskrit literature, are a source of light and power for mankind. He said that Vedas are the first announcer of universal brotherhood, world welfare and world peace and that only Vedas can establish happiness and peace while paving the way for development for mankind.

Prof Panda further added that the character development of the society can be done by taking shelter of the Vedas. Vedas are the foundation of Indian culture. He said that the sources of all knowledge are present in the Vedas.

“While sufficient material related to religion, ethics, social life, political science, economics, ayurveda etc. is available in Vedas, material related to various parts of science is available in abundance. This language has been in power since the beginning of creation. Many languages of the world have become obsolete but Sanskrit language is continuously flowing and giving life to other languages. Sanskrit is the cornerstone of our culture. Sanskrit is not just a language, it is our culture, our history, our philosophy of life,” the VC added.

He further said that to be away from Sanskrit is to be away from one’s own culture. Today, when the occult culture is dominating us, in such a situation, Sanskrit becomes even more relevant.

Prof Sriprakash Pandey, former Head of the Department of Sanskrit, Babasaheb Bhimrao Ambedkar Bihar University, Muzaffarpur, the special guest of the programme said that today there is a need to teach Sanskrit as an active living language and an effective medium of communication. He said that it means not only to get acquainted with ancient Sanskrit literature but also to create contemporary literature. He said that the meaning of teaching Sanskrit through Sanskrit medium is to make Sanskrit teaching method more integrated by adopting all modern methods of teaching and approaches of language teaching to make Sanskrit simple, interesting and effective.

He further added that Indian knowledge wealth available in Sanskrit should be included in all subjects of school education like science, mathematics, history etc. He said that it is a well-known fact that to acquire proficiency in a language it is necessary to study through that language. To acquire proficiency in Sanskrit, ‘Sanskrit, through Sanskrit medium’ is indispensable because students in their higher studies have to study the scriptures only through commentaries.

Prof (Dr) Jai Narayan Pandey, ex-Chairman of the Post Graduate Sanskrit Department of Ranchi University, said that Sanskrit has an incomparable ability to bind people together. People who have not studied Sanskrit also look upon Sanskrit with respect. The development journey of comparative linguistics cannot be imagined without Sanskrit. Prof Pandey said that the governments should make concerted efforts for the promotion of Sanskrit knowledge.

Welcoming the guests, Prof Ramashish Pandey, Secretary, Sanskrit Seva Sangh, Ranchi, emphasized the relevance of the study of Sanskrit literature. He said that our culture embodied in Sanskrit determines our lifestyle. He said that Sanskrit is fully capable of taking us away from the evils of Western occultist ideology.