by Lagatar News
in Entertainment, National & International
A A 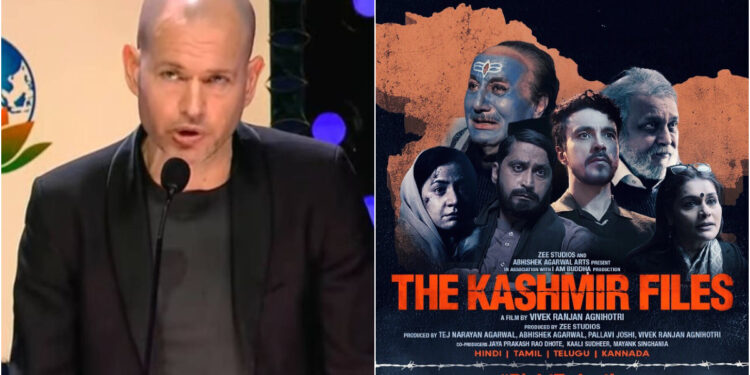 New Delhi, Nov 29: A practising lawyer of the Supreme Court on Tuesday filed a complaint with Goa police against International Film Festival of India (IFFI) Jury Head Nadav Lapid for allegedly abusing Hindu community sacrifice made in Kashmir by calling the movie ‘The Kashmir Files’ as ‘vulgar’ and ‘propaganda’.

The complaint against Nadav Lapid stated that attorney Vineet Jindal filed a complaint against him and requested registration under sections 121, 153, 153A and B, 295, 298 and 505 of the Indian Penal Code for his alleged comment on the film ‘The Kashmir Files,’ which is based on the true story of the genocide against Hindus in Kashmir.

The ‘exodus and massacres’ of Kashmiri Pandits in the Valley in the 1990s by Islamic terrorists are the subject of the movie ‘The Kashmir Files’. He is exploiting the sacrifice of Hindus in Kashmir and attacking the Hindu community by using derogatory words vulgar and propaganda upon Hindu killings in order to incite hatred in our country, it continued. He did this by calling a movie based on a true story about the genocide of Hindus by Islamic terrorists that occurred in Kashmir “propaganda” and “vulgar.”

The complaint has been addressed to the Director general of police (DGP).