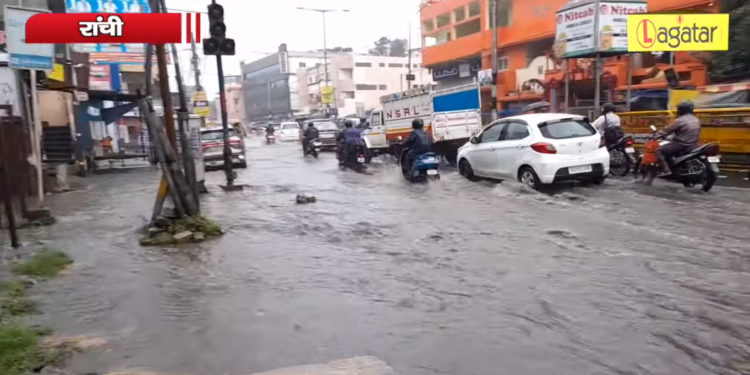 Water-logging at Kishoreganj Chowk in Ranchi

Residents of these areas claim that complaints regarding the issue of overflowing have fallen on deaf ears at RMC.

Nitesh Singh, a local in Indrapuri claimed, “I have been a resident here for the past 10-15 years. We have requested the RMC on several instances to work on the issues of water logging and the below-the-level roads. Nothing has been done so far.”

Rakhi Kumari from the Azad Basti said, “This happens every year. Nothing has been done on time so far. Maybe after the rain subsides the RMC will wake up and clear the drains.”

The problem of water-logging is connected to the issue of drains overflowing. Notably, the Jharkhand High Court had earlier questioned the Ranchi Municipal Corporation regarding its treatment of drains in the city as well. This had happened when a PIL was filed by a homeowner complaining that dirty road water had entered his house.

On the other hand, efforts are being made to settle the short-term problem of water-logging as soon as possible. In this sequence, water has been drained by distilling machines in areas like Kokar, Lalpur, Bada Talab, Harmu, Bye Pass Road, Dhurwa, Morabadi, and Ratu Road among others.

Water is being extracted continuously from the machines in the presence of the municipal corporation’s team in all the areas. The water logging situation has been rectified at some places, while work is in progress at others. Apart from this, officials have claimed that the drains are being cleaned continuously in all the wards by the Ranchi Municipal Corporation.