New Delhi, June 1: WhatsApp was recently found to be testing the edit button on the beta version of the app. The real-time messaging app currently lacks a specific editing feature. A text may only be removed once it has been sent; however, a planned feature may make it possible to amend texts after they have been sent.

Wabetainfo, a website that keeps track of all WhatsApp-related news, noticed the functionality. WhatsApp has made significant changes to the way we communicate with one another. It will soon allow users to amend messages after they have been sent, after the release of the feature to react to messages. WhatsApp is said to have started working on the function five years ago but abandoned it once it was exposed on Twitter.

However, WhatsApp has finally considered working on the edit feature again after a five-year absence.

The screenshot of the edit feature that is currently being developed has been posted by Wabetainfo. 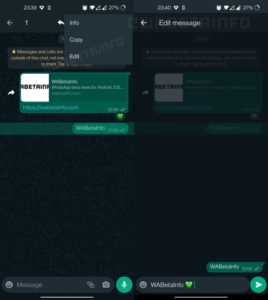 When you pick a message you’ve sent, you’ll see a separate edit option, as shown in the screenshot. Users will be able to edit their messages in addition to copying and forwarding them. Even after you’ve sent your message, you can use the edit button to repair any typos or spelling errors. Users can only delete messages under the current setup. It is not possible to delete or amend it once it has been sent.

The functionality was being tested on WhatsApp beta for Android, but according to the article, WhatsApp is working on introducing the feature to WhatsApp beta for iOS and Desktop as well, with more specifics to come later. However, because this feature is still in development, it is impossible to say when it will be ready for a stable upgrade, although WhatsApp may begin rolling it out to more beta users shortly.